The EAG Short Course and Conference Sponsorship Program is open to EAG members who are organizing a short course or small conference in Europe focused on special topics or techniques from the broad field of geochemistry. The program provides up to 200€ per student to support student attendance at the event.

Since 2010 the fast-growing community of scientists interested in clumped isotopes meet every ~1.5 years for a few days’ workshop, to discuss methodological development and inter-laboratory standardization, learn about exciting new applications, and share ideas. The workshops are structured around several sessions of lectures and posters, with a large portion of the time being devoted to formal and informal discussion.

The 8th ICIW has been postponed to May 2021. More information will be posted here when available.

2nd International Conference on Contaminated Sediments (ContaSed2020 is postponed to 2021)
Sediments are sources and sinks of contaminants, and play an important role in mediating pollutants across compartments of ecosystems. ContaSed2021 will focus on organic and inorganic sediment contaminant classes including microplastics, emerging contaminants, heavy metals and persistent organic pollutants. Abstract submission deadline: 26 January 2021.

Thanks to support from the EAG through the Short Course and Conference Sponsorship Program, financial support is available for Masters and PhD students attending the conference. See here for more information on how to apply. Application deadline: 15 February 2021.

Tools in Biogeochemistry, a 5-day course co-sponsored by the European Association of Geochemistry, focused on the use of cutting edge analytical, spectroscopic and microscopic tools in environmental biogeochemistry. The workshop introduced the underlying principles of these techniques and discussed their applications in the fields of biogeochemistry, environmental chemistry and geomicrobiology. Opportunities for hands-on exercises in the lab were also provided. Particular focus was placed on organic matter and microbe-mineral interactions in soils and sediments, and their influence on toxic metals.Techniques covered:
– Transmission and Scanning Electron Microscopy
– Synchrotron-based X-ray absorption techniques (XANES, EXAFS)
– Mössbauer spectroscopy
– Microbial culturing and microbial community analysis
– Mineral particle size, surface area and charge analysis
– Microelectrodes in biogeochemistry

Participants at the ‘Tools in Biogeochemistry’ workshop, August 2019

DINGUE is a geochemistry workshop covering all technical and scientific aspects of noble gas geo- and cosmochemistry. In 2019, the workshop was held at ETH Zürich, Switzerland on the weekend before the Goldschmidt Conference in Barcelona. The DINGUE VI workshop kicked off with an ice breaker on Thursday 15 August 2019 and continued with talks and posters on Friday 16 and Saturday 17 August.

Thanks to sponsorship from the European Association of Geochemistry, a student travel support of €125 was awarded to eight students presenting their work at DINGUE VI. One of the students, Alan Seltzer, received the “Pete Burnard Award” during the meeting, in recognition of his contribution to the analytical development and advancement of noble gas measurements. 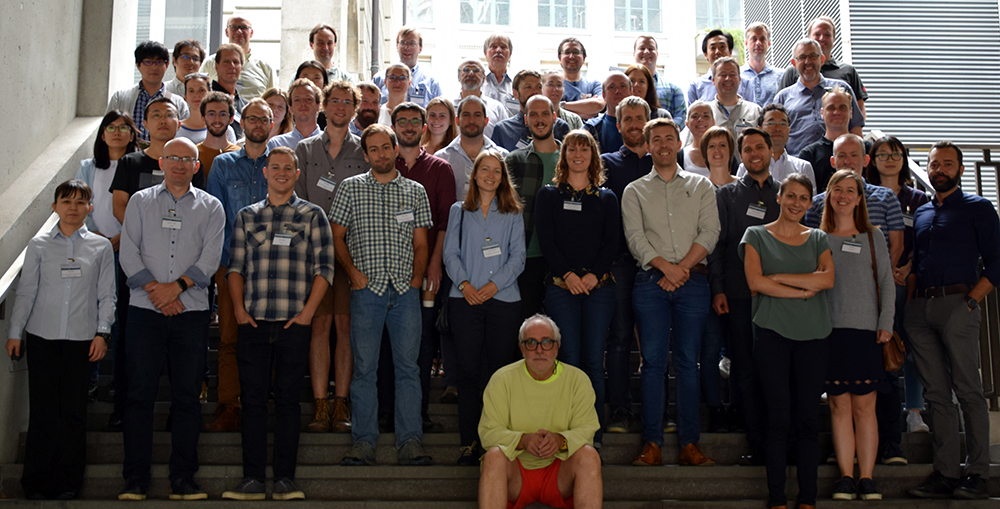 As in previous editions, the aim of this fourth edition of the Wageningen Soil Conference was to discuss the importance of soils, and in 2019, the focus was on ‘Understanding soil functions: from ped to planet’. A new style of conference was adopted for 2019, with traditional conference talks in the mornings, followed by scientific and interactive topic masterclasses in the afternoons, ranging from field trips to interactive classroom dialogues and from demonstrations to hands-on laboratory and computer tutorials. Each conference day concluded with a public event including, on Wednesday August 28th, the EAG-sponsored ‘Rising Soil Stars’ pitch competition for early-career scientists.

The Rising Soil Stars were prepared for their pitch by a professional trainer, who provided individual coaching and hosted a group workshop in which participants could also practice on stage. The ten students then pitched their work to a broad audience in just three minutes, using nothing but a single slide to support their talk. The jury (featuring Marie-Aude Hulshoff from the EAG) and audience then decided which student deserved the title of Rising Soil Star the most.

Many congratulations to all ten finalists, and especially Jury Winner Muhammad Aammar Tufailo (University of Trento, Italy), for his talk entitled “Ssssshhh! Bacteria are coming to help you“, and Audience Winner Jeanne Maréchal (University of Rennes 1 (ECOBIO) and Sol Paysage company, France), for her pitch entitled “Psychoanalysis of an urban earthworm“.

How to apply for sponsorship?

Following the short course or small conference, sponsored students should produce a one-page report on their experience. Some of those reports will be published on the EAG Blog.

Applications for online as well as hybrid and in-person events will be considered.

Sponsorship requests should be addressed to the EAG Office at office@eag.eu.com and include: