The EAG-GS Outreach Program is a partnership between the Geochemical Society and the European Association of Geochemistry, with the directive of developing outreach activities in geochemistry in under-represented regions of the world. 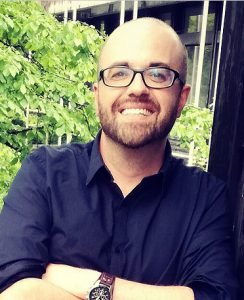 Sebastian Doetterl is a physical geographer with a special focus on soil development. He is working as an Assistant Professor (tenure-track) for Soil Resources at ETH Zurich’s Department of Environmental Systems Science since 2019, is the group leader of the DFG funded Emmy Noether research group “TropSOC” and co-founder of the Congo Biogeochemistry Observatory. Doetterl is especially passionate about engaging stakeholders, decision makers and scientists in the Global South to profit from and advance our knowledge of biogeochemical cycles in tropical environments. With this, he contributes towards a better understanding of tropical soil systems and how these differ from temperate regions, where most of our knowledge is derived from.

His research is oriented towards carbon and nutrient dynamics across geo-climatic gradients with a focus on the effects of anthropogenic disturbances on soil development. He is particularly interested in helping to bridge the gap between process understanding from experimental data to model development and spatial representation of biogeochemical cycles. He has been working on soil development and its consequences for biogeochemical cycles in a large variety of ecosystems, including large scale gradients and chronosequences, with his latest focusing being on tropical African landscapes.

As part of the EAG-GS Outreach Program, Dr. Doetterl will give two connected lectures on the role of biogeochemistry and soil development in complex tropical landscapes for carbon and nutrient cycling. A special emphasis will be given on the rapid land cover changes we are observing in tropical Africa as population grows, and climate as well as land management changes.

The first lecture will focus on the role of pedogenesis for understanding today’s soil landscapes and their properties in tropical and subtropical Africa with a focus on natural ecosystems. This lecture will illustrate how soil development can govern and control carbon input, turnover and stabilization in soils and how ecosystems adapt towards but also shape the properties of tropical soils.

The second lecture will focus on the emergence of new soil landscapes and their relevance for biogeochemical cycles in the 21st century and beyond with a special focus on tropical Africa. Emphasis will be given on the effects of land conversion for soil biogeochemistry and soil fertility, how these effects differ across soil types and landforms and how knowledge on soil biogeochemistry can help us to improve cropland management but also reforestation.

Each lecture is about 90 minutes long. Participants are invited to reach out to the lecturer for an extended discussion afterwards.

Hasnaa Chennaoui Aoudjehane is a Moroccan scientist in the fields of Meteoritics and Planetary Sciences and Geochemistry, and is Professor at the Hassan II University of Casablanca, Director of the GAIA Laboratory and Coordinator of the Centre of Research on Geo-ressources and Environment. Hasnaa was the first woman to graduate in Meteoritics in Morocco and Arabic countries. She obtained her first PhD, in Noble Gas Geochemistry, from the Université Pierre et Marie Curie Paris 6, France, and defended her “Thèse d’état” on Meteoritics at the Hassan II University of Casablanca, Morocco. Read more

Hasnaa presented a series of workshops and seminars on meteoritics and planetary sciences in universities and institutes across Africa in 2019. 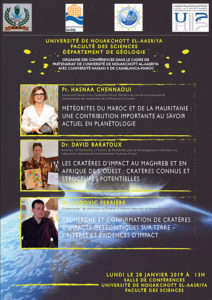 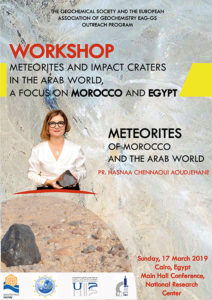 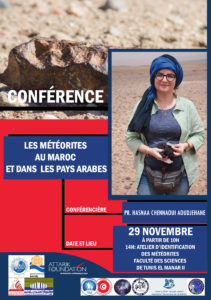 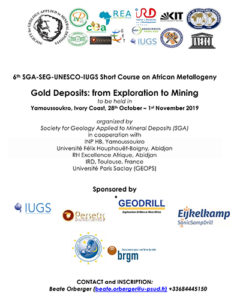 “Gold Deposits: from Exploration to Mining”

This five-day short course on gold deposits, exploration and mining was held at the Institut National Polytechnique Félix Houphouët-Boigny in Yamassoukro, Ivory Coast. It was addressed to researchers, lecturers, PhD students, geologists from exploration, mining companies and government institutions, and was composed of 2.5 days of lectures and 2 days of field excursion (Yaoure gold mine and surroundings). EAG made grants available to support the attendance of students and young researchers. 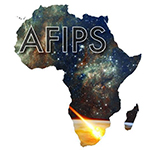 As part of the 2018 Outreach Program to Africa, the European Association of Geochemistry (EAG) and the Geochemical Society (GS) co-sponsored the Africa Initiative for Planetary and Space Sciences (AFIPS), whose objectives are:

An article on the activities of AFIPS initiative, written by the AFIPS Steering Committee, was published in the February 2018 issue of Elements Magazine.

As part of the initiative, two workshops were organised with financial support from the EAG and GS: 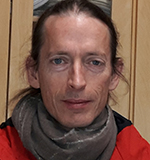 Axel Hofmann holds a doctorate from the University of Mainz in Germany and has worked as a researcher and lecturer at the University of Zimbabwe in Harare, Wits University in Johannesburg and the University of KwaZulu-Natal in Durban. His main interest and expertise is centred on the Archaean geological record of southern Africa. His research emphasizes the importance of field work and the usage of an integrated suite of petrological and geochemical tools in order to decipher the geological history of Archaean volcano-sedimentary successions. His research is undertaken at the interface between geology, geochemistry and geobiology, utilizing analytical equipment for in-situ trace element geochemistry, geochronology and (non-traditional) stable isotope geochemistry at the micro- and nano-scale, for the understanding of Archaean surface processes, early life and sediment-hosted mineral deposits. 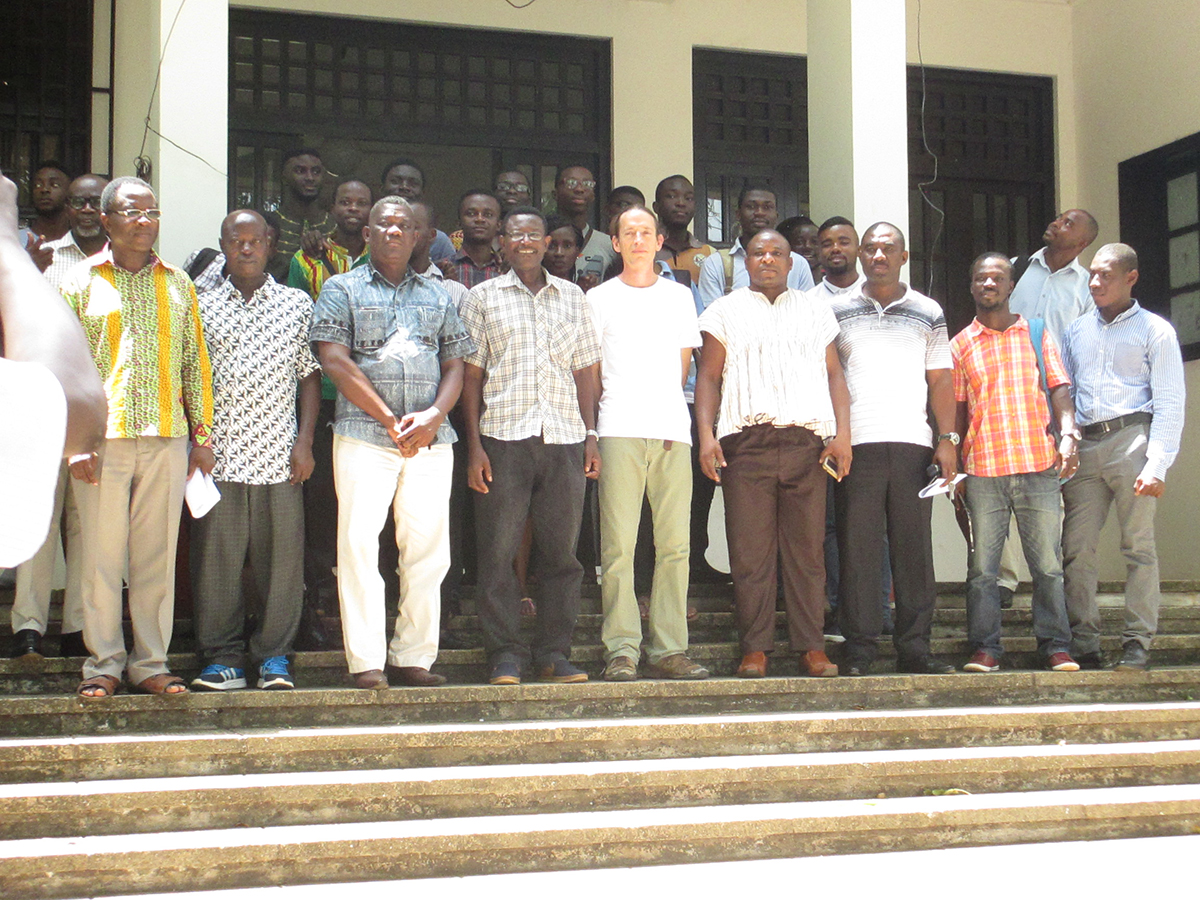 Axel Hofmann, students and professors at the University of Ghana 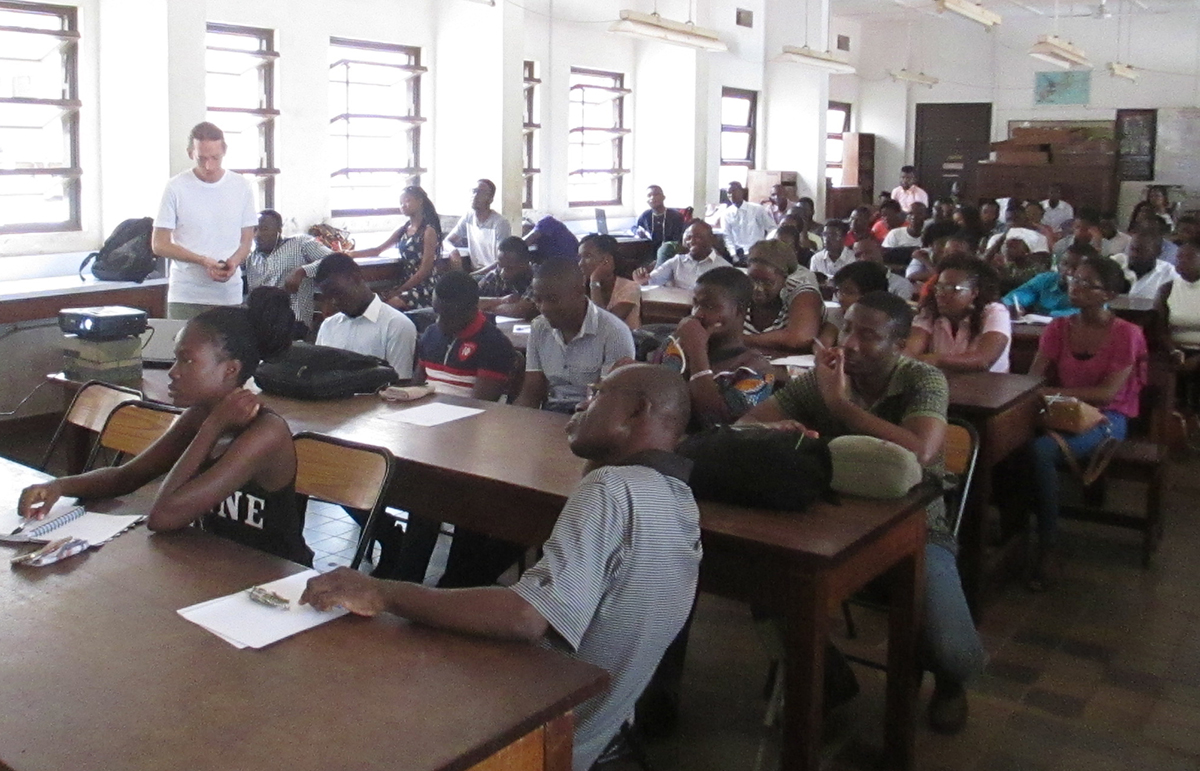 Axel Hofmann at the University of Ghana 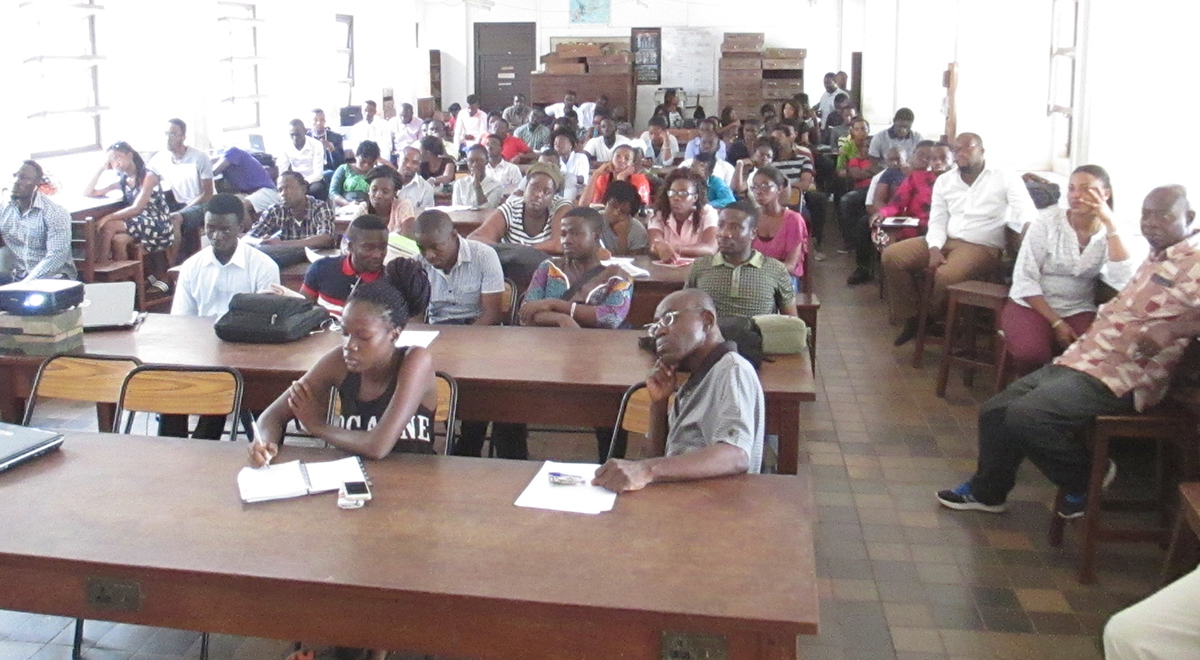 The attentive audience at the University of Ghana 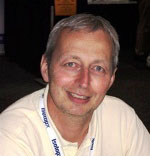 François Chabaux is Full Professor of Geoscience and Geochemistry at the “Ecole et Observatoire des Sciences de la Terre (EOST)” at the University of Strasbourg, France. Since 2000, he chairs the Isotope Geochemistry and Environmental Chemistry team (co-chairs with D. Lemarchand since 2014). Currently, he heads the “Laboratoire d’Hydrologie et de Géochimie de Strasbourg” (LHyGES- Laboratory of Hydrology and Geochemistry of Strasbourg), which he founded in 2009 with his colleague P. Ackerer (Research Director, CNRS). Read more 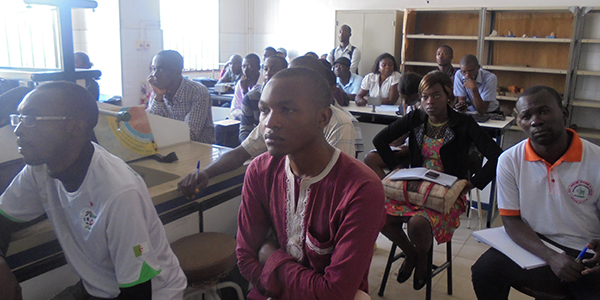 The very attentive audience of the Earth Sciences Department, University of Yaoundé I

Pierre Deschamps is Research Scientist at IRD (Institut de Recherche pour le Développement) and he is currently working in the Geochemistry and Geochronology Group at CEREGE (European Centre of Research and Teaching in Environmental Sciences).
His fields of expertise cover isotopic geochemistry and geochronology by using a large range of isotopic tracers, including U-Th and U-Pb chronometers and cosmonuclides (14C, 36Cl, 10Be). He uses this isotopic toolbox in studies ranging from Earth surface processes, human evolution to quaternary climate change. For the last years, a large part of his research has been carried out on the African continent and has focused on the past climate variability and its impact on hydrological cycle, including groundwater. Read more

Bernhard Wehrli is Full Professor for Aquatic Chemistry at the Department of Environmental Sciences at ETH Zurich. He is a member of the directorate of Swiss Federal Institute of Aquatic Science and Technology (Eawag).

The research of his group is focused on the assessment of biogeochemical processes in rivers and lakes. The group combines chemical sensors, stable isotope techniques and molecular ecology to quantify carbon and nutrient cycles in aquatic systems. Part of his research is focused on the development of interdisciplinary approaches to improve the sustainable management of water resources. Read more 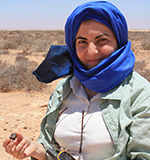 Hasnaa Chennaoui Aoudjehane is a Moroccan scientist in the fields of Meteoritics and Planetary Sciences and Geochemistry, and is Professor at the Hassan II University of Casablanca, Director of the GAIA Laboratory and Coordinator of the Centre of Research on Geo-ressources and Environment. Hasnaa was the first woman to graduate in Meteoritics in Morocco and Arabic countries. She obtained her first PhD, in Noble Gas Geochemistry, from the Université Pierre et Marie Curie Paris 6, France, and defended her "Thèse d'état" on Meteoritics at the Hassan II University of Casablanca, Morocco. She has received several awards for her research, including the 'Paul Doistau-Emile Blutet' in Planetology, Academy of Sciences, Institut de France in 2009, and the Moroccan National TV SNRT Trophy for 'Distinguished Women in Morocco' in 2016. In 2005, she became an elected member of the Nomenclature committee of the Meteoritical Society, serving for two terms, and became a member of the Council of the Meteoritical Society in 2010. In 2013, she was selected for the US 'International Visitors Leadership Program IVLP', 'Women Innovations in Science and Engineering' WISE program in MENA region, and in 2014 was awarded the US Department of State’s Women in Science Hall of Fame award. In April 2016, she was selected as an Africa Science Leadership Program Fellow (Pretoria, SA). Hasnaa introduced Meteoritics and Impact Cratering to Morocco and the Arab countries and curricula on Cosmochemistry and Meteoritics to Moroccan universities. She is supervising several PhD theses on this topic in Morocco. She has studied and classified many meteorites from Morocco, including the most recent nine falls and, notably, the "Tissint" meteorite, the fifth eye-witnessed Martian meteorite fall. She has published a paper in Science magazine about Tissint, proving the origin of all Martian meteorites and the presence of fluids on Mars. She has organized several meetings in Casablanca, Morocco, including the 77th Meteoritical Society meeting in September 2014, organized for the first time in an Arab and Muslim country.
×

François Chabaux is Full Professor of Geoscience and Geochemistry at the “Ecole et Observatoire des Sciences de la Terre (EOST)” at the University of Strasbourg, France. Since 2000, he chairs the Isotope Geochemistry and Environmental Chemistry team (co-chairs with D. Lemarchand since 2014). Currently, he heads the “Laboratoire d’Hydrologie et de Géochimie de Strasbourg” (LHyGES- Laboratory of Hydrology and Geochemistry of Strasbourg), which he founded in 2009 with his colleague P. Ackerer (Research Director, CNRS). François Chabaux and the Isotope Geochemistry and Environmental Chemistry team* focus on studying the mechanisms and characteristic times involved in weathering processes and transfers of matter in continental hydro-systems. The studies are carried out by developing and using the tools of elemental and isotopic geochemistry. Over the last 15 years, François Chabaux has been highly involved with the Strasbourg group for developing the methodology of U-series nuclides to constrain the time scales of weathering processes and of the sediment transfers in alluvial plain. He was also involved in the development of geochemical approaches based on the new isotopes (Ca, B, Li..) to depict the main processes involved in biogeochemical cycles. François also participated in the development of French and international critical zone observatory network; the LHyGeS and the EOST are in charge of the Strengbach watershed, used since 1986/87 as a Hydrological and Geochemical Observatory for the environment (Observatoire HydroGeochimique de l’Environement (OHGE) – resp: MC Pierret- ass. prof. EOST). François Chabaux and colleagues at Strasbourg, especially Peter Stille (Research Director, CNRS) contributed significantly during recent years to the development of hydro-geochemical studies conducted on the OHGE Critical Zone Observatory. From 1987 to 1993, François Chabaux was research and teaching Assistant at Université Paris 7 and then at the IPGP, France. After receiving his PhD on the U-series nuclides in volcanic rocks, prepared under Claude Allègre supervision, he spent 18 months, as Research Associat at the University of Cambridge, UK, in Keith O’Nions group. He was appointed Assistant Professor for Geochemistry at the University of Strasbourg in 1994 and Full Professor in 1998. *Permanent staff of the “Isotope Geochemistry and Environmental Chemistry” team (2015): E. Beaulieu (ass. prof., ENGEES); R. Boutin (IR CNRS), F. Chabaux (prof., UdS); C. Fourtet (T, CNRS); S. Gangloff (AI, CNRS); F. Gauthier-Lafaye (DR CNRS); M. Granet (IR CNRS); D. Lemarchand (ass. prof., UdS); N. Mahr (IE, CNRS); G. Morvan (IE, CNRS); E. Pelt (IR, CNRS); T. Perrone (AI, CNRS); M.C. Pierret (ass. prof., UdS); S. Rihs (ass. prof., UdS); P. Stille (DR CNRS); D. Viville (CR CNRS); T. Weber (ass. prof., UdS).