About the P.W. Gast Lecture

The selection of the lecturer alternates between the GS Board of Directors and the EAG Council depending on the location of the Goldschmidt Conference.

To be eligible, nominees must have received their PhD at least 10 years and no more than 25 years of full time equivalent research employ before the Goldschmidt conference at which the lecture is presented.
Nominations of underrepresented groups are encouraged.

We are committed to promoting the diversity of our awardees, to recognizing a wide range of different types of exceptional contribution, and we acknowledge the different career paths that lead to the achievement of such contributions.

The award is presented annually at the Goldschmidt Conference and consists in a certificate and an honorarium (1000 Euros).

During his career, Paul W. Gast pioneered the study of rare earth elements in examining the crust, mantle, and interior of the planet. He led the development of the use of rubidium-strontium and uranium-lead radiometric dating methods for rocks, particularly for samples returned from the Moon. His examinations of trace elements resulted in new understands of how volcanic fluids originate. Gast was the first recipient of the V.M. Goldschmidt Award.

Recipient of the 2022 P.W. Gast Lectureship: 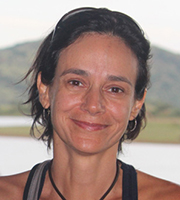 Vaness Hatje presented the 2022 Paul W. Gast Lecture as a plenary lecture at the Goldschmidt2022 Conference.
Lecture (click on the link to watch the video): ‘Rare Earth Elements: Tracers of Natural and Anthropogenic Processes Along the Continent-Ocean Continuum’.

Recipients of the P.W. Gast Lectureship

Click on the Lecture Title to watch the lecture.

An “outstanding / exceptional / profound contribution(s)” encompasses one or various combinations of the following contributions:

The European Association of Geochemistry and the Geochemical Society recognize that there are diverse research career paths, as well as the challenges of managing a research career alongside other personal commitments, possible chronic illness, and/or disability. When reviewing applicants’ eligibility and research experience, the societies will take into consideration - where reported with brevity in nomination packages - time spent working on a part-time basis and/or outside of the research environment. If a nominee has been reported to have worked part-time, they should briefly state the percentage of full-time equivalent hours that they observed and the time period it pertains to.

Where nominees have had a career break, worked outside of scientific research (where relevant to the nominee’s assessment category), taken formal periods of maternity, paternity shared parental and adoptive leave as the primary care giver, or extended/repeated sick or bereavement leave, this will be taken account of by awards committees. Each case will be considered individually.