The 29th V.M. Goldschmidt Conference is just behind us, and after a two-year preparation process, comes a sense of relief that it all went well and that everyone had a fantastic conference. Yet also a tinge of sadness that it’s all over. However, Goldschmidt2020 will be here soon enough!

Goldschmidt2019 was held 18-23 August 2019 in Barcelona (Spain) in the beautiful ‘Centro de Convenciones Internacional de Barcelona’, located near the beach, which many delegates enjoyed (and to which some groups even managed to get pizzas delivered!). Nearly 4,100 delegates participated in the six-day meeting, making Goldschmidt2019 the third largest Goldschmidt conference to date, after Paris in 2017 and Florence in 2013. Student representation reached 32%, significantly up on the 25% in 2013.

The organization of Goldschmidt2019 was led by the European Association of Geochemistry (EAG) and overseen by Derek Vance (ETH Zürich) and Helen Williams (University of Cambridge), co-chairs of the Organizing and Science Committees. However, as always, Goldschmidt is a community-run conference involving hundreds of scientists ranging from committee members to theme chairs, session chairs, workshop panellists, mentors, student helpers and many more. Everyone contributes to the success of the conference so the EAG warmly thanks everyone for their participation, time and energy.

A warm welcome from the Student Helpers

Here are the main numbers for this year’s conference: 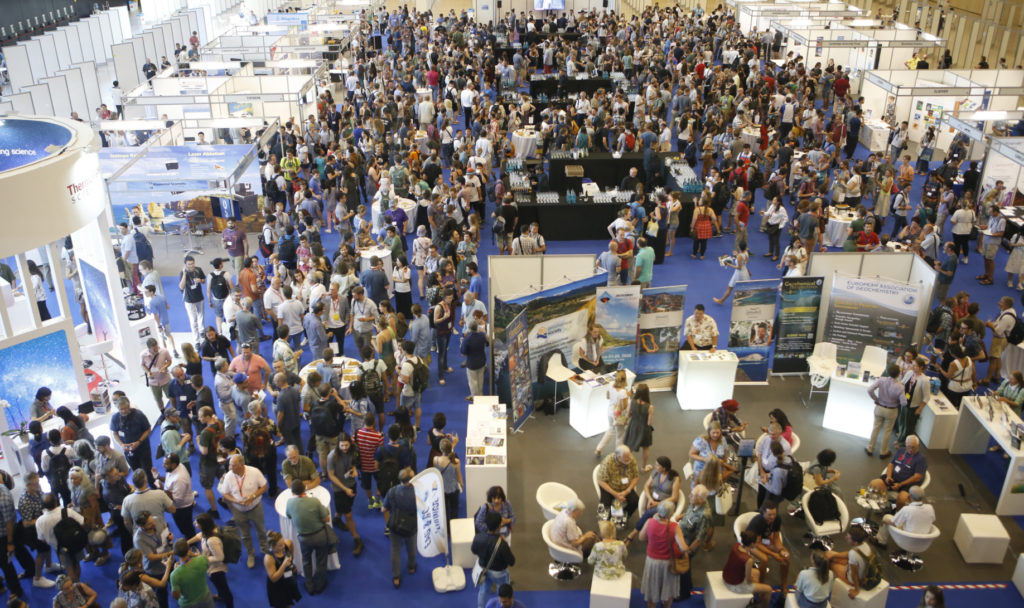 Delegates travelled from 74 different countries and the 15 largest delegations came from: 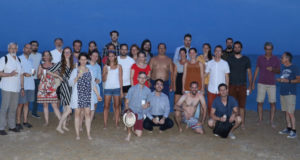 The Hungarian delegation managed to all get together on the beach!

New this year: the Flash Talks

New this year: the Flash Talks

Goldschmidt2019 introduced a new talk format: the Flash Talks. This is where delegates presented a snapshot of their research in four minutes, in addition to presenting a poster. There were 479 Flash Talks presented in two Flash Talk Theatres, located in the exhibition area. Attendance was very high from the first day and feedback very positive. As a result, the experience will be repeated in the future.

This year, the Early Career Program, developed by Sami Mikhail and Arola Moreras Marti (both at University of St Andrews), included a special focus on careers outside academia, inviting geochemists who now work, or have worked, in consultancy, scientific publishing or research & development, to share their experience about their career paths.
In addition to these, workshops were held on oral presentation skills, science communication, best practices in academic publishing, interactive teaching methods, confidence & public speaking, and the difficult topic of love & careers in academia (or how to manage career paths when a couple consists of two academics).
Some of those workshops have been video recorded – see below.

Each day, a small group of students also had the opportunity to share lunch with the plenary speaker and ask all their questions in an informal setting. The plenary speakers equally enjoyed the experience. Finally, the pop-up talks were presented mid-week.

All in all, this made for a very comprehensive program for our early career delegates and we are delighted to notice an increasing representation of the new generation.

The AMIGo initiative was started in 2018, following the efforts made by the Geochemical Society to implement a Code of Conduct for the conference. All participants had to abide by this code, and the EAG Council and GS Board members as well as society staff received special training and served as points of contact for any delegate who had questions or experienced harassment during the conference. Those points of contact were easily identified through their yellow badge.

Families at the conference

This year, special efforts were made towards offering subsidized childcare at 10 Euros per half day (or 100 Euros for the entire week). We are very happy to report that childcare was fully booked throughout the week, the children interacted very well together and had a lot of fun, but most importantly parents were extremely satisfied with the level of care which brought them peace of mind while they in turn attended the conference. We are very grateful to Noah’s Ark Childcare for their fantastic work.

Links to conference websites, videos, photos, program volumes or abstracts can be accessed from the Goldschmidt Archive.

Check all the photos from Goldschmidt2019.

Here are all the videos from Goldschmidt2019:

Monday plenary: Bethany Ehlmann ‘Mars: Geochemical Cycling on a Once Habitable World’, preceded by the Welcome Words and the European Association of Geochemistry awards

Friday Plenary: Chris Hawkesworth ‘The Onset of Plate Tectonics’, preceded by thank you words and promotion of future conferences