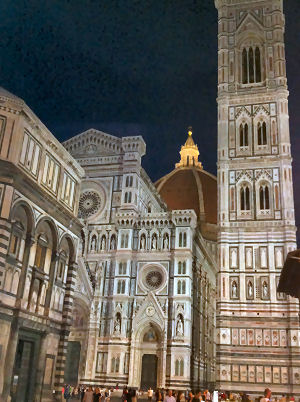 The 23rd V.M. Goldschmidt Conference, was held this year in the beautiful renaissance city of Florence, the capital city of the Italian region of Tuscany.
Florence is renowned for its history, architecture and culture. It was a centre of medieval European trade and finance and one of the wealthiest cities of medieval times. It is generally considered to be the birthplace of the Renaissance, the flowering of art, diplomacy and science which began there in the 14th century. Given Florence’s beauty and popularity as a tourist destination the organisers were not surprised that this Goldschmidt conference attracted the largest number of abstracts and participants so far.

In detail the number of abstracts submitted was 4132 of which 4062 were presented at the conference, with 2095 oral and 1967 poster presentations.
The total number of registrants was 4183 (25% students), the 20 largest delegations being from the following countries:

The Goldschmidt conference is organized in alternate years by the Geochemical Society and by the European Association of Geochemistry. Florence 2013 was the responsibility of the EAG. It was decided early in the organizational process that there are relatively few venues in Europe capable of hosting the 18-20 parallel sessions required for a Goldschmidt Conference. Owing to the increasing success of the Goldschmidt Conferences, however, the organizing committee decided that it would not be too risky, in financial terms, to hire a major conference centre purpose built for large multi-sessioned scientific conferences. Hence the decision to hire the conference centre located in Florence’s 16th Century fortress.

The principal convenors were the organizing committee chairman Bernard Wood, EAG’s past president Bernard Bourdon, EAG’s current president Chris Ballentine, the local convenor Massimo Coltorti and the chairman of the 2011 Goldschmidt meeting Bernard Marty. (You don’t have to be English or French, but being Bernard helps!). These members were supplemented by members of the scientific committee (see below) and the administration of the conference was ably run by Cambridge Publications, whose head, Paul Beattie, was also a member of the organizing committee.

Our science committee composed of Bernard Wood, Janne Blichert-Toft, Andreas Kappler, Massimo Coltorti, Martin Frank and Chris Ballentine, the EAG President, defined 24 science themes and identified scientists worldwide to chair these themes. The theme chairs each formed a committee that then identified 4 to 8 sessions in their themes and selected scientists to convene these sessions. In total, about 140 sessions were identified by autumn 2012. This was followed by a call for sessions to the community and, after review by the Science Committee approximately 70 further sessions and one further theme (Union) were accepted. This led to a total of 211 sessions distributed over 25 themes. Given the flexibility of the conference centre we were able to accommodate most requests for oral presentation.

The conference was preceded by 14 workshops, 12 of which were hosted in Florence by our colleagues at the University of Florence. Total attendance at the Florence workshops (in an outstanding location) was 444 while the 2 “external” workshops attracted 94 participants. Three field trips ran before the conference and 4 after the conference with a total attendance of 136. The organizing committee wishes to thanks once more the University of Florence for its hospitality and all the field trip and workshop organizers for their enthusiasm and energy in bringing their diverse skills and knowledge to the Florence Goldschmidt.

After a well-attended icebreaker on Sunday afternoon, the conference began in earnest at 9am on Monday 26th August. In a departure from previous meetings it was decided that the plenary lectures and formal opening ceremony would take place immediately after lunch. After welcoming remarks from the Rector of the University of Florence, Geochemical Society President Rick Carlson presented his plenary lecture “Making Earth”. On succeeding days the plenary lectures were presented by Francis Albarède (Isotopes of Disease), Paolo Gasparini (Natural Hazards and Scientific Advice: Interactions Among Scientists, Decision Makers and the Public), Robert Hazen (Earth’s Carbon Through Deep Time) and Sujoy Mukhopadhyay (Probing the Hadean World with Noble Gases). Despite the lunchtime attractions of a sun-bathed Florence the post-lunch plenaries were very well-attended and this time slot may become a feature of future meetings.

Following recent tradition the oral sessions ran from 9.00-12.00 (with refreshments) and from 14.30-17.30 and were succeeded by poster sessions (with beer) from 17.30-20.00. The latter occupied good space within the main building of the conference space. Total consumption of coffee, tea, cakes and beer exceeded €400K.

A total of 6 social events were held during the week. In addition to the icebreaker these were a wine and cheese party in the Basilica, a classical concert at San Lorenzo church, a showing of the films “Chasing Ice” and “Thin Ice”, a rock/blues concert in the courtyard of the congress centre given by CRPG-based Double Scotch band and the conference banquet. The latter was held in the “Cavaniglia” adjacent to the conference centre. There were also a total of 19 local tours and events organized, some of which took place multiple times.

At the behest of EAG Council, this Goldschmidt Conference was marked by a major effort to reach out to the world’s media to promote our research. The session Chairs were asked to identify abstracts which might have some press potential. Those suggested were then whittled down, by our media Committee, to 10 abstracts which were considered potentially attractive to the media. We engaged CampusPR to write draft press releases and Tom Parkhill as Goldschmidt Press Officer. After discussions with the authors concerned the media committee and CampusPR finalized 5 press releases under the following headings:

These were released through agencies and via email and through the medium of a Press Conference at the meeting. Steven Benner’s work on the suggested evolution of early life on Mars went global, with reports in many languages and in many top-rank media outlets, such as the Los Angeles Times, Reuters, New Scientist, all the main UK papers, French and Italian news agencies, and so on. Perhaps the highlight was Steve’s live appearance on BBC Radio’s Today show, which is the top news outlet in the entire BBC. Some of the other stories also achieved considerable international coverage enhancing the impact of the Goldschmidt Conference and our science on the general public. A fuller summary by Tom Parkhill can be found here.

As anticipated by the organizing committee, Florence 2013 proved to be the most successful, in terms of participants, Goldschmidt Conference so far. This demonstrates, once again, that attractive locations with reasonable accommodation costs are of major importance when organizing international conferences. Although dealing with the conference centre was not entirely trouble-free, most difficulties were resolved amicably through the good offices of Paul Beattie and his colleagues at Cambridge Publications. The size and success of the conference means that Goldschmidt is now large enough for us to consider other locations in Europe which have thus far been prohibitively expensive. Florence remains a viable option for some time into the future, however, and is actively being considered for the 2017 meeting.

In conclusion I wish to thank the members of the organizing and science committees for all the hard work that they put into ensuring that the 2013 meeting was a success.