I am delighted to participate in this event honoring Lenny Winkel’s contributions to biogeochemistry.  Of course, I am sorry that I cannot be there with all of you enjoying the ‘in person’ meeting in Hawaii.

This year’s Science Innovation Award honors Prof. Heinz Lowenstam’s pioneering work in biogeochemistry. Prof. Lowenstam’s work highlighted the role of algae, specifically through biomineralization, in geological processes.  Lenny’s work follows this tradition by expanding our understanding of biogeochemical controls on the distributions of trace elements, particularly selenium, in soils at the global scale.

To recap Lenny’s biography briefly, her formal training was in Earth Sciences with an MSc (equivalent) from Utrecht University in 2000 and a doctorate from ETH Zurich in 2006.  Her postdoctoral experience included stays at Eawag (2006-2008) and, as part of the Marie Curie AquaTRAIN project (2008-2011), at the University Joseph Fourier in Grenoble, the Technical University of Crete, and the University of Aberdeen.  In 2011, Lenny was appointed as an SNSF Research Professor at ETH Zurich and group leader at Eawag.  In November 2013, this was changed to a tenure-track appointment.  Since March 2018, Lenny has been an Associate Professor of Inorganic Environmental Geochemistry at ETH Zurich in the Department of Environmental Systems Science (D-USYS).

Lenny has been invited to give a number of plenary lectures.  I would just like to highlight two awards that she received in 2019 – the Goldene Eule Award for exceptional and excellent teaching at ETH Zurich and the Sandmeyer Award from the Swiss Chemical Society.  Lenny is an active member of the geochemistry community.  She serves on awards committees for EAG and GS and is an Editorial Board member for the journal Environmental Science: Processes & Impacts published by the Royal Society of Chemistry.  She is also very active in organizing conferences, including next year’s Goldschmidt conference.

Of course, it is much more interesting for all of us to hear about Lenny’s scientific contributions, which she will present in her upcoming talk.  As a teaser, let me just mention that Lenny has made important contributions to the understanding of the biogeochemical cycling of two elements, arsenic and selenium.  Working on arsenic, Lenny made major advances by using a logistic regression model to identify key geological, hydrological, and soil characteristics that are strongly correlated with high groundwater arsenic concentration.  Lenny applied a similar approach to selenium, recognizing that selenium deficiency in soils can lead to reduced crop yields and to adverse health impacts for animals (including humans) whose selenium intake depends on the concentrations of this essential element in food crops.  Lenny’s work demonstrated the importance of the atmospheric supply of selenium to soils, providing an explanation for the substantial variability of the global distribution of selenium in soils.  Recently, Lenny contributed to building the first global atmospheric selenium model by implementing selenium chemistry in an aerosol-chemistry climate model.  Lenny’s work suggest that, under moderate climate change scenarios for 2080-2099, soil selenium concentrations are likely to decrease, particularly in agricultural areas.

Coming back to algae for a moment (in honor of Heinz Lowenstam), let me just mention that Lenny has examined pathways for selenium (and sulfur) volatilization mediated by algae, including uptake and methylation processes.  This links to a key aspect of Lenny’s work, which is to cross scales from the molecular to the global.  This is easy to say, but extraordinarily challenging to do.  This is what I tried to highlight in the 50-word summary of Lenny’s accomplishments that I included in my nomination:

Congratulations Lenny! We look forward to your lecture.

First of all, I would like to express my sincere gratitude to the European Association of Geochemistry and its president Derek Vance and vice-president Catherine Chauvel for honoring me with this prestigious award named after a true pioneer in biogeochemistry Heinz Lowenstam, who played a key role in the discovery of biomineralization in the marine environment. I would like to thank very much my nominators and the Science Innovation Award committee for this fantastic recognition.

Already as a young girl, I was fascinated by the Earth’s history and my favorite subject in highschool was physical geography. I had an inspiring teacher who could tell exciting stories about how the landscape of my home country, the Netherlands, was shaped. In my school vacations I went with my parents literally scraping the marl outcrops in the southern Netherlands to look for ammonites, belemnites and other fossils and I was fascinated about their silent testimony of the marine underwater world that the Netherlands used to be.

So, it has always been clear to me that I wanted to study geology. After I graduated from highschool, I went on to study geology at Utrecht University. During my undergraduate studies I became captivated by the subject area of structural geology as this field enabled the construction of geological processes in time and space. It was absolutely fascinating to see how geological structures could be recognized from the microscale in thin section up to very large scales, even on satellite images and linking the continuum of microscopic to field to global scales has been one of my main research interests ever since.

Through my graduation project, I came first into contact with Geographic Information Systems and how these can be used to map and predict geological structures based on satellite images. After my graduation I moved for the first time to Switzerland – I guess not a surprise for someone from the lowlands and interested in mountains and minerals – where I got further trained in the more chemical aspects of geology, i.e., in mineralogy and geochemistry. I did my PhD at the Paul Scherrer Institute in the laboratory of Solar Technology under the supervision of Terry Seward at ETH Zurich. At this stage I was still interested in geology but I also wanted to focus more on applying geological and geochemical expertise on studying problems with more direct relevance to society, so I decided to work on a project that aimed at extracting copper from ores using sunlight as energy source and preventing harmful SO2 emissions in the extraction procedure. During my PhD research I learned a lot about trace elements, most importantly arsenic which was a major impurity in the studied sulfidic ores, and this triggered my interest for further work on this element.

After my PhD I joined Eawag (the Swiss Federal Institute of Aquatic Science and Technology) where many of my previous research interests and expertise converged as I started a project aimed at broadscale geospatial predictions of arsenic in groundwater. I worked together with Michael Berg, Stephan Hug and the late Annette Johnson, who was a pioneer in merging geochemistry to the field of human health and who inspired me by her genuine interest in helping local populations tackling geogenic contamination of groundwaters.

After this project, I joined the European research consortium AquaTRAIN and continued doing research on arsenic but I also started working on selenium: like arsenic it is an element that can be toxic to humans and other organisms but it is also essential at lower doses, which made me curious to learn more about its behavior in the environment. I started working with Laurent Charlet – who was always interested in exploring new and exciting ideas – and with Andy Meharg and Joerg Feldmann in Aberdeen. From Joerg I learned a lot about analytical chemistry and how to measure speciation of trace elements and Andy inspired me to think about cycling of selenium across the soil-plant-atmosphere interface. I further developed this idea of connecting the different environmental compartments to better understand the biogeochemical cycle of environmental selenium when I started as a SNSF (Swiss National Science Foundation) funded professor at ETH Zurich and Eawag in 2011. I got tenure in 2018 and I am very grateful to the support from my colleagues at ETH: I particularly would like to thank Janet Hering, Kris McNeill and Martin Ackermann, who believed in my research and fully supported me in getting tenure. Each of these individuals have been important mentors in my career and their visions on achieving equal opportunities for women and minorities in sciences has always been a huge inspiration. In addition, I would also like to thank my other colleagues from Eawag and ETH, Michael Berg, Ruben Kretzschmar, Niki Gruber, and especially Bernhard Wehrli – I am proud to be his successor – for all their help and support.

In closing, based on my previous research and interactions with many inspirational scientists that I had the chance to meet and work with, it became clear to me that to in order to grasp the complexity of biogeochemical cycling of trace elements it is important to look across spatial and temporal scales – taking me back to my early geology days – and to combine field observations, experimental and analytical work and modeling to establish a multi-tool and multi-scale framework to understand the bigger picture of trace element cycling. Establishing this approach would not have been possible without all the people who inspired me and worked with me. Apart from the people I already mentioned, I am very grateful to all my colleagues and collaborators, especially, all the former and current PhD students, postdocs, technicians, administrators who contributed largely to this success. 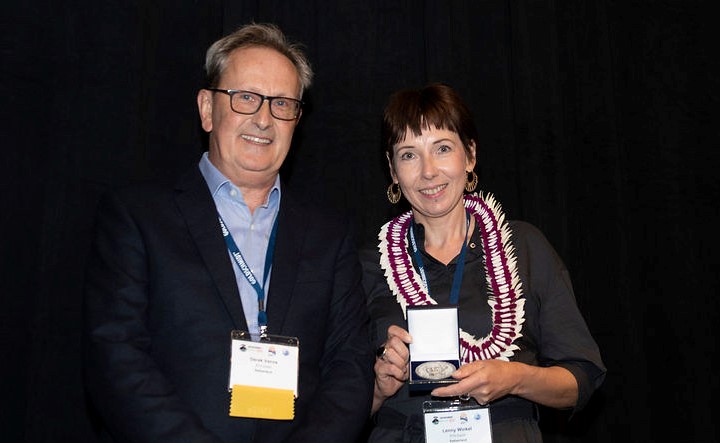