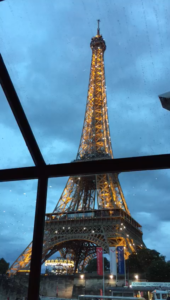 The glittering Eiffel Tower during the dinner cruise

The 27th Goldschmidt Conference of the European Association of Geochemistry (EAG) and the Geochemical Society (GS) recently took place in Paris, France, and while preparations for Goldschmidt2018 in Boston are already on the way, we’d like to share with you some statistics and highlights of the conference.

Goldschmidt2017 has certainly broken several records, including the highest numbers of attendees and abstracts, and the conference’s success is the product of the hundreds of volunteers who served among the Science, Organising and Local Committees, or as theme chairs, conveners, mentors and bloggers! We warmly thank all contributors for their time and commitment, and would also like to address special thanks to our fantastic team of student helpers.

We particularly wish to recognise the dedication and leadership of Antje Boetius – Principal Convenor and Chair of the Organising & Science Committees, Bernard Marty – EAG President, and Marc Chaussidon – Chair of the Local Organising Committee.

Participants came from 85 countries, some as far
as New Zealand! The 20 most represented
countries were: 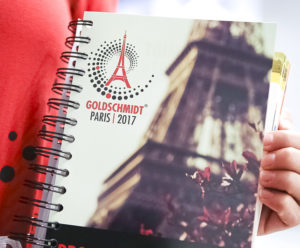 We thank Adina Paytan for her efforts setting up an extensive program for junior delegates at Goldschmidt2017.
This year, the program included:

The Goldschmidt Conference has a strong tradition of supporting the attendance of delegates from countries with low-income economies, and in 2017, the Grant Program enabled 58 junior scientists to attend. We also thank the Geochemical Society and Elsevier for their financial support to this program. Another 27 grants were awarded to US-based students thanks to generous contributions from NSF and NASA.

Recognition of scientific excellence is at the heart of the societies’ values and this is perfectly illustrated by the 14 awards presented at this year’s conference—another record! We wish to congratulate all medallists again. The full list is available at https://goldschmidt.info/2017/medalsView. Interviews of some medallists can be found on the EAG blog at http://blog.eag.eu.com/category/goldschmidt2017/. 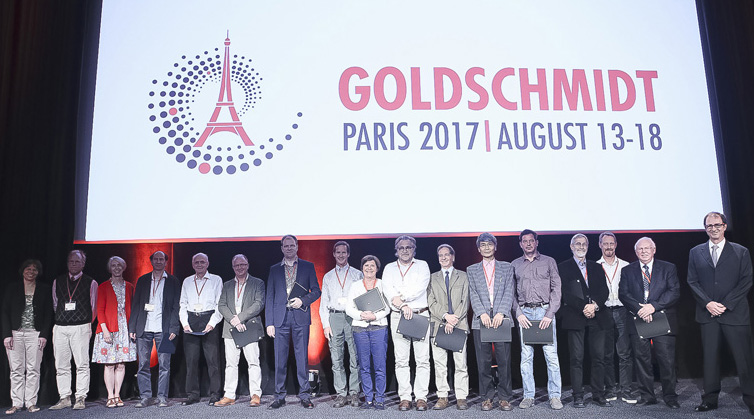 Lecturers’ biographies and abstracts are available here and videos of all the plenary talks can be viewed at https://www.youtube.com/user/goldschmidtconf

Here are some highlights:

A science video competition was a first at Goldschmidt and we’d like to thank Adrienne Macartney for this wonderful initiative. More than 90 submissions were received and, after a first round of selections, 15 of the best short science films were screened throughout the conference. An average of 60 delegates attended the daily lunchtime screening, and special workshops and discussions on how to make a science movie were also organised. The 15 movies selected can be watched at http://wildorbitfilms.com/finalists2017/finalists2017.html (also see the special blog post ‘Goldschmidt Wild Orbit Cinema’ by Claire Cousins). Two external judges chose the 3 best movies, which are Biology Meets Subduction (Deep Carbon Observatory), Atoms to Volcanoes (Terry Thomas) and Paleodul (Gonzalo Moreno). Congratulations to the winners!
Here is a short post-conference movie provided by Wild Orbit Cinema:

Goldschmidt2017 broke yet another record with 14 pre-conference workshops attended by 361 scientists. These covered an array of subjects, from geochemical modelling, to noble gas understanding, boron environmental geochemistry, and many more. See the full list of workshops. 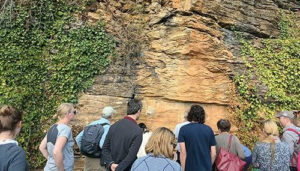 Another 84 delegates participated in the four pre- and post-conference field trips, mixing science with the discovery of local treasures (local wine, delicious food and beautiful landscapes!).

We take this opportunity to thank all of the workshop and field trip organisers.

As per Goldschmidt tradition, a full and diverse social program was offered to attendees, who were able to discover Versailles at night and with fireworks, to walk through the Marie Curie’s Latin Quarter, to enjoy the traditional ice-breaker, dance at the Goldschmidt Rocks Party, dine on the Seine while discovering Paris’ wonders, and enjoy special museum tours of the Louvre or the Musée d’Orsay. A total of 1543 social tickets were sold this year, probably another record! 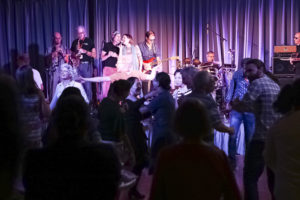 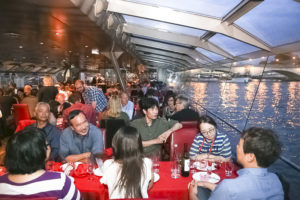 Dinner cruise on the Seine

The success of the Goldschmidt Conference is also possible thanks to the support of our sponsors. We are particularly grateful to our Platinum sponsor Thermo Fisher Scientific, our Palladium sponsor Agilent Technologies, and our Gold sponsor Oxymore. And of course we were most excited to welcome 40 exhibitors, who we thank for sharing their expertise with the delegates.

Goldschmidt2017 was also quite active on social media with 1234 tweets – check them out at https://twitter.com/goldschmidt2017.

Finally, another record was possibly broken with the number of conference photos taken: 1039 in all! The photos are all available online and, as always, videos of the plenary talks can be viewed at https://www.youtube.com/user/goldschmidtconf

Our final thanks go to the conference organiser White Iron Conferences, and to all the delegates of Goldschmidt2017 who made it such a memorable event! The European Association of Geochemistry and the Geochemical Society look forward to welcoming you to a fantastic 28th V.M. Goldschmidt conference in Boston, 12–17 August 2018.