The 25th V.M. Goldschmidt Conference, was held this year in the beautiful city of Prague, the capital city of the Czech Republic. Prague has an amazing cultural heritage, a unique cuisine, large quantities of affordable accommodation, and world-class conference facilities. Building on our knowledge from 2011, we have rearranged the conference layout for improved poster presentations and provided upgraded internet access. We wish to thank the Prague City Council for their financial support and for once again, providing transit passes allowing all delegates to move readily around the city free of charge. We are also wish to recognize our sponsors Nu Instruments and The Geochemist’s Workbench.

The number of abstracts submitted was 3660 with 1940 oral and 1678 poster presentations. The total number of registrants was 3769 (32% students), the 20 largest delegations were from the following countries:

The magnificent city of Prague.

The Goldschmidt conference is organized in alternate years by the European Association of Geochemistry and by the Geochemical Society, with the Geochemical Society of Japan as principal co-sponsor. Prague 2015 was the responsibility of the EAG, however the Goldschmidt conference is truly a wide community effort; over 500 geochemists volunteered their time either as theme chair, session chair, blogger, mentor, or as a member of one of our committees. We are indebted to all for their efforts in having made the 2015 meeting a great success.

Our science committee, composed of Eric Oelkers, Liane G. Benning, Dan Frost, Catherine Jeandel, Wilhelm Heinrich, Kirsten Küsel and Hisayoshi Yurimoto, identified 24 science themes and theme chairs. Each of them formed a committee that then identified 4 to 8 sessions in their themes and selected scientists to convene these sessions. Further sessions were solicited through an open call. In total, this led to a total of 177 sessions distributed over the 24 themes. 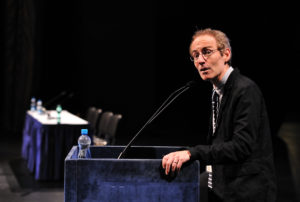 Eric Oelkers, the Convener of the Prague Goldschmidt Conference, welcoming the community to Prague. 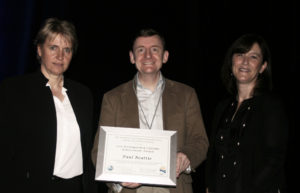 The conference was preceded by 12 workshops, 11 of which were hosted in Prague at Charles University. Total attendance at the workshops was 400. Seven field trips ran before and after the conference with a total attendance of 123. The organizing committee wishes to thank once more Charles University and the Czech Geological Survey for their hospitality as well as all the field trip and workshop organizers for their enthusiasm and energy in bringing their diverse skills and knowledge to the Prague Goldschmidt.

After a well-attended icebreaker on Sunday afternoon, the conference began in earnest at 8:30am on Monday 17th August. The plenary lectures and formal opening ceremony took place immediately before lunch. After welcoming remarks from the convenor, Peter Sale presented his plenary lecture “Oceans in the Anthropocene: End of the High Seas; Need for Repair and Reasoned Management”. On succeeding days the plenary lectures were presented by Janne Blichert-Toft (Neo-Plumbotectonics), Barbara Sherwood Lollar, President of the Geochemical Society (Dark Energy from the Deep Hydrosphere: Water-Rock Reactions Sustaining Deep Subsurface Microbiolog), Andrew Revkin (Can Science Help Shape a “Good” Anthropocene?) and Ann Pearson, the Gast Lecturer (Organic Geochemical Proxies). You can find videos of those lectures on the Goldschmidt Conference Archive at goldschmidt.info. 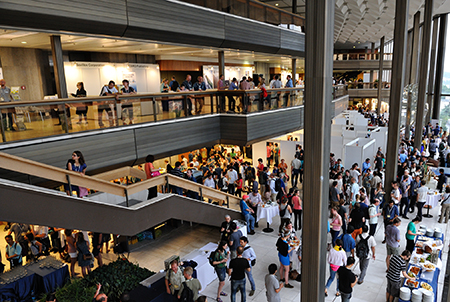 Inside the Prague Conference Center. 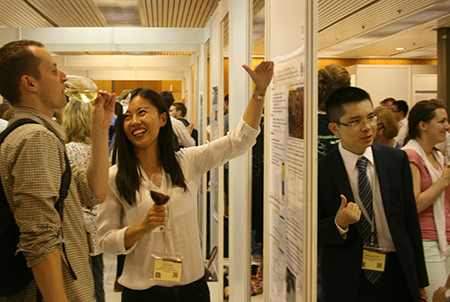 Posters sessions, as always, were central to the conference.

Numerous social events were held during the week. In addition to the icebreaker, these included a classical concert at St. Ignatius church, dinner at the Brevnov Abbey, and the conference banquet, held at the magnificent Municipal House in central Prague, was attended by over 1000 delegates and included dancing till 1:00 am Friday morning. 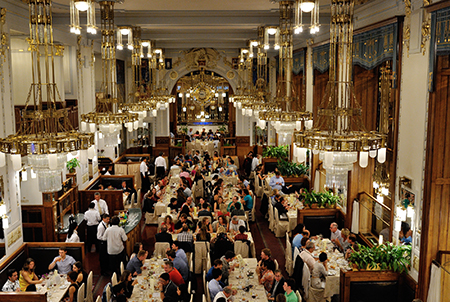 Enjoying the banquet at the Art-Nouveau French Restaurant within the Prague Municipal House. 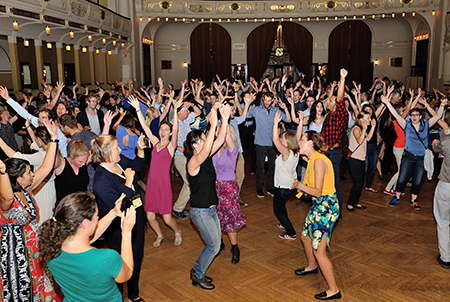 The banquet was followed by dancing till 1 a.m. in the Smetana Concert Hall at the Prague Municipal House.

In celebration of the 25th Anniversary of the Goldschmidt conferences, a number of special events were held. A special ceremony was held at the beginning of the first plenary session to honor Hu Barnes, who first launched the Goldschmidt conference in May 1988 in Baltimore Maryland, USA, originally attended by 464 participants. This 2015 meeting also featured 25 plenary talks highlighting the 25 greatest advances in Geochemistry over the past quarter century. These talks, given by leaders in the various conference themes were designed to introduce our community to the broad range of advances made throughout the field of Geochemistry. Finally, EAG-GS 50 Student Ambassadors were selected.

Heather Stoll, Student & Mentoring Program Leader, put in a herculean effort to generate a diverse and greatly appreciated student program. Her efforts were clearly successful as 32% of the total delegates were students, a percentage far exceeding past conferences. The student program included a series of lunchtime events focused on such diverse fields as career planning and how to publish manuscripts. A new lunchtime ‘Meet the Plenary’ event was organized where the students could meet directly with the Plenary speakers following their talk to discuss further their presentation. Perhaps most appreciated was the student mentor program. This program, started last year at the Sacramento conference, links together students with senior mentors who volunteered their time to help the student navigate their way through the conference. A total of 120 mentors and 241 students participated in the 2015 program.

We wish to thank the organizations which supported these events, DMG, ISEB, MSGBI groups EMG, GG and VMSG, SGI, SIMP, SFIS, as well as Elsevier, Exxon Mobil and Nature Communications.

Through the generosity of the EAG, NASA, and the NSF a total of 131 student delegates received a waived registration to the conference and several more received support to cover their travel and living costs while attending the conference.

Particular efforts were made to identify stories which would be of interest to the public at large and receive wide media coverage. Following initial selection by the session chairs, Tom Parkhill, Goldschmidt Press Officer, wrote and distributed 5 press releases:

Some of the stories achieved considerable international coverage enhancing the impact of the Goldschmidt Conference and our science to the general public.

Prague 2015 proved to be a highly successful Goldschmidt Conference. This demonstrates, yet again, that attractive locations with reasonable accommodation costs are of major importance when organizing this conference. Dealing with the conference centre was generally trouble-free through the large efforts of Martin Novak, the head of the local committee. Considering the smooth running of this meeting and the great feedback to date, Prague is an attractive venue for a future Goldschmidt conference.

In conclusion, I wish to thank the members of the organizing and science committees, and the geochemical community as a whole for all the hard work that they put into ensuring that the 2015 meeting was a great success.