The Goldschmidt2011 meeting was held this year in the beautiful city of Prague, Czech Republic. This conference, held alternatively in North America and in Europe, is sponsored in Europe by the European Association of Geochemistry. 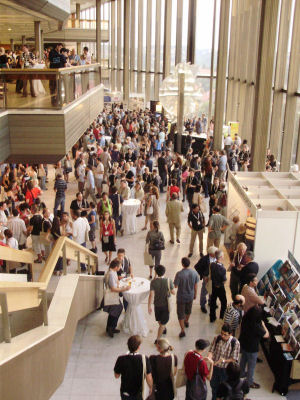 The Prague meeting broke a new record: with a total of 3644 abstracts submitted and 3312 registered delegates (30% students), this was the biggest Goldschmidt Conference to date. Delegates came mostly from (in decreasing order):

1970 oral presentations were given, and 1741 posters were presented. The conference banquet, held in the magnificent Municipal House of Prague, was attended by 1029 guests. And a total of 20,000 glasses of the famous Czech beer were drunk over 4 evening poster sessions! 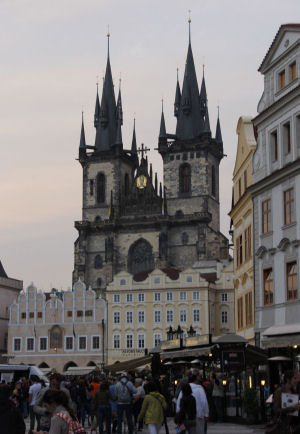 The European Goldschmidt conferences are now organized directly by the EAG. The motivation for organizing them through the EAG was the increasing size of the meeting and the fact that it became harder to find local institutes or local consortia willing to take on future meetings. The EAG decided then to proceed in a different manner, by first finding a site that would be both attractive and able to provide an infrastructure able to host the 20 or so parallel sessions and 3000 plus delegates at a reasonable fee.

Most major Western Europe capitals are too expensive to host this meeting without significantly increasing the registration fee. Paul Beattie, CEO of Cambridge Publications, the conference organization company, investigated possibilities in Europe with representatives of the EAG, and Prague became an obvious target city. Its Congress Center, built in 1989 in the communist era mostly to host congresses of brother communist parties (it was used in fact only once for this purpose before the fall of the Berlin wall) met the specifications in terms of space and room numbers to hold the meeting. Furthermore, the Congress Center is only 3 subway stations from the historical city. Prague is an exceptionally attractive city with its outstanding historical center, its very reasonably priced accommodation, and its numerous restaurants and bars downtown.

The principal convenors were the organizing committee chairman Bernard Marty, EAG’s past president Eric Oelkers, EAG’s current president Bernard Bourdon, the local convenor Martin Novák (from the Czech Geological Survey), and the chairman of the 2009 Goldschmidt meeting Chris Ballentine. The administration of the conference was run by Cambridge Publications, which also had a place on the organizing committee (Paul Beattie) with help of the EAG council.

A science committee composed of Bernie Wood, Sue Trumbore and the convenors defined 22 science themes and identified scientists worldwide to handle these themes. Special effort, not always successful, was given to have two chair people of different genders and different continents within each theme. The theme chairs then identified 4 to 7 sessions in their themes and selected scientists to convene these sessions. In total, 135 sessions were defined by Fall 2010, and then a call for sessions was opened to the geochemical community, which resulted in about 100 more proposals. Of these, about half were retained, the others being merged with already defined sessions or, more rarely, rejected. We ended up with 182 sessions that were advertised at the end of 2011.

It became clear early on that, given the success of the conference (3711 abstracts received), we needed as much time as possible for oral presentations. We therefore decided not to have morning and afternoon breaks, and also to run sessions on all the five days without scheduling a free half day in the middle of the meeting. The rationale was to privilege science, with a ~ 50:50 distribution between orals and posters.

During the final steps of organization, the earthquake-tsunami disaster struck northern Japan and cost the lives of more than 20,000 people. The tsunami also resulted in the Fukushima Daiichi nuclear accident, which contaminated significant areas around the plants with radionuclides. Evaluating and mitigating the consequences of this event was clearly in the realm of our competences, so we proposed to the Geochemical society of Japan, GSJ (through its president Mitsuru Ebihara) that we should organize a special session on the mechanisms of the accident itself and on its aftermaths from the short range to the worldwide scale. The GSJ responded enthusiastically, and a day-long session was thus organized in parallel with regular sessions. 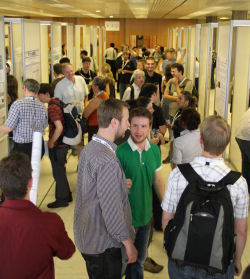 After a well-attended icebreaker on Sunday afternoon, the conference was opened on Monday, August 15th, 2011 by EAG President Bernard Bourdon and a plenary talk by Sam Musaka, the Geochemical Society (GS) President. Each morning was opened by a plenary talk and the distinguished speakers were Marc Hirschmann, Edouard Bard, Franck Selsis, and Victoria Orphan. These were followed by oral presentations in 18 parallel sessions. The new medalists of GS and EAG were introduced between the plenary talks and the beginning of the sessions, and the awardees gave their ‘Medal’ scientific talks in the relevant sessions. On each day (apart from Friday) there were poster sessions held from 5 to 7 pm, with plenty of snacks and drinks lubricating discussions along the crowded rows.

Four field trips were held before or after the conference, exploring the environmental and cultural heritage of the Czech Republic. These were attended by over 100 delegates.

The special Fukushima session was attended by 150 to 300 people, a good result since this session was run in parallel to the other 18 sessions. Presentations included the seismic context, the causes of the accident, the dispersion of short lived isotopes in soils, air, the oceans, and the atmosphere worldwide, and prospects for the evolution of the damaged nuclear power plant. At the end of the session GSJ president Mitsuru Ebihara presented a statement, also endorsed by the presidents of the GS and the EAG, requesting more transparency in the treatment of information and more involvement of the geochemical community.

Several social events were held during the week, including classical music concerts in three of Prague’s most beautiful churches, a dinner at the Brevov Abbey, and a free rock/blues concert in the Forum Hall of the congress centre given by CRPG-based Double Scotch band (with Bernard Marty on guitar). The banquet was held in the magnificent Municipal House, an Art Deco building in the heart of Prague which, due to its sumptuous Art Nouveau decoration, has been the scene of several blockbuster movies including Mission Impossible, and La Vie en Rose.

Great science was naturally the focus of the conference. Dating precisely the birth of the solar system, a long standing controversial issue, seems to have gained maturity: both the short lived chronometers (e.g., 26Al-26Mg) and the long-lived ones are now consistent once other nuclear effects are taken into account. The debate of a chondritic, or not, Earth continues, fuelled by new meteorite data that explore the origin of matter that made the Earth. The Late Veneer hypothesis has gained traction with independent lines of evidence emerging for post Giant-Impact accretion to Earth of possibly oxidized planetesimals. Furthermore, momentum is growing that this late accretion delivered significant volatiles to Earth. Geochemical evidence seems to support a warm (>30 °C) early Earth even if physical modelling of different ancient atmosphere does not. Although geodynamical and petrologic models for the early Earth support the view that the first crust was mafic (or ultramafic) in composition, this crust appears to have been essentially destroyed by Eoarchean time (>3.6 Ga). However, evidence is mounting that a geochemical memory of this previously extensive crust continued to be recorded well into the Paleoarchean.

The physics behind core accretion to Earth (and the other terrestrial planets) suggests that the competition between direct implantation of the impactor’s metallic core to the target core and emulsification of the impactor’s core in the target’s mantle makes all of the difference whether a “Late Veneer” is recorded in a planet’s mantle. Tungsten isotope anomalies are now found in 3.8 Ga-old terrestrial rocks, which bears important constraint on early evolution of Earth. Direct ion probe evidence for “fast” (600 Ma) recycling of seawater in the source of mantle plume was presented.

A tribute to George R. Tilton (1923 – 2010), who pionered U-Pb dating of the Earth, rocks, minerals included a collection of presentations that highlighted these pioneering contributions to deciphering the age and chemical evolution of Earth, the moon and meteorites, mantle dynamics in rifting and intraplate settings, terrestrial Pb isotope evolution, and novel U-Pb applications in geochronology.

In the important field of Earth´s Resources, the study of mineral deposits appears closely linked to the core of geochemistry; metal distribution in melt and fluid, evolution of the ocean, atmosphere, biosphere, and lithosphere, state-of-art analytical technique for dating mineral deposits. The Geotraces sessions saw the introduction of several new isotope techniques for studying marine biogeochemical cycles; in particular, the first report of the detection of anthropogenic 236U in the ocean. It turned out also that the physical concepts to understand the occurrence of stable noble gases in terrestrial waters might help to constrain the dynamics of radon in the ocean. This represents only a glimpse of what was debated during five days in Prague.

Another vibrant and yearly increasing field is molecular environmental geochemistry and geobiology. For example the talks about “The ash that closed Europe’s airspace…” highlighting how only a detailed understanding of mineral surface fluid interaction processes leads to reliable air-traffic safety predictions that may affect millions of people. Equally, the use of novel NanoSIMS approaches to evaluate mineral/microbe properties during weathering or how novel metagenomic or transcriptomic approaches help us create uniquely integrated datasets of genetic and functional diversity in extreme environments. Finally, various talks nicely highlighted the link between careful experiments on the nucleation growth and dissolution of mineral phases and atomistic modelling showing how these links become crucial for our understanding of macroscopic and even global scale (bio) geochemical processes.

There were several issues which could be improved upon at future conferences: technical problems with WiFi and sometimes with the AV at the beginning of the conference, and some of the most popular talks were attended by too many delegates to be accommodated in their rooms. However, despite these few unfortunate glitches, it was generally agreed that the conference was a great success both scientifically and socially. The success of the conference reflects a discipline that is thriving and is of increasing importance to society, as it holds important information, techniques and skills for approaching some of the major issues faced by society today. These include climate change, the disposal of nuclear waste, the management of the Earth’s water resources and the discovery of new mineral resources to name but a few.

Plans are already progressing well for the next two Goldschmidt Conferences (Montréal in June 2012, and Florence in August 2013). These look set to be exciting meetings and to continue the series of effective conferences serving the geochemical community.

View additional photos of the conference