It is an honor and a privilege to introduce to you William White as the recipient of the 2022 Urey medal, the European Association of Geochemistry’s highest honor.  This year the medal is awarded to a pioneer in geochemistry. Throughout his career Bill White has been at the forefront of geochemistry and several of Bill’s discoveries have made it into textbooks; and that is not because Bill wrote the textbooks, but because they have truly become an accepted part of our thinking and knowledge. One of these discoveries is the geochemical evidence that plume volcanism contains recycled sediment. This discovery, made in the early 1980s, was a game-changer in our understanding of mantle dynamics. A fundamental question was: If plumes originate from the core-mantle boundary, how could sediment get to this lowermost mantle, if the mantle was divided into separate upper and lower parts that are physically isolated from each other?  The discovery went against conventional wisdom. It also clearly showed, and this is not a minor point, that global geodynamic processes can be interrogated with geochemistry.

Bill’s research has impacted many areas of trace element and isotope geochemistry. His contributions to both analytical developments and the clever application of new analytical techniques provided answers to long-standing questions.  For example, Bill’s work on the Lesser Antilles, which showed convincingly that the geochemistry of island arc volcanism reflects the composition of the local sediment being subducted, is a classic.

Harold Urey would have been very interested in Bill’s work on “incompatible” trace elements and the U, Th Pb systematics and how these systematics relate to the radiogenic heat production in the Earth. There is also no person that I can think of that understands the Pb-isotope and U-Th-Pb systematics better than Bill White. In addition to making seminal contributions to understanding the Earth’s heat budget, his research also led to the realization of the magic ratios, trace element ratios that are invariable during most fractionation processes: Nb/U and Ce/Pb. These ratios are still one of strongest constraints on deep recycling of crust. These are fundamental principles that we now take for dogma.

Bill has also left an indelible imprint on geochemistry with his contributions to the geochemistry community. Bill was instrumental in the creation of the first all-electronic journal in the Earth Sciences: G-cubed: Geochemistry, Geophysics and Geosystems. His crucial involvement started well before the first issue appeared. Twenty years ago this was a pioneering effort and Bill gave new meaning to the term founding editor. Bill is the editor of the Encyclopedia of Geochemistry, one of the most comprehensive works in geochemistry. And, perhaps most recognizable to most of you in the audience, Bill is the author of two textbooks: “Geochemistry” and “Isotope Geochemistry”. These textbooks explain the fundamentals so clearly and in-depth that it is not only a textbook, but also a review. The breadth of topics and the depth at which they are discussed is unmatched in our discipline and will surely be an enduring legacy to the geochemical community.

William White embodies geochemistry. His ideas and contributions have become common knowledge. Bill’s legacy is both the science he contributed as well as the example of his commitment to the geochemistry community at every level.

Throughout his career Bill has worked on and visited many ocean islands and there is no more appropriate location for him to receive the Urey medal than on top (almost) of a mantle plume.

It is my honor to present Bill White to receive the Harold Urey medal from the European Association of Geochemistry.

First of all, I want to say thank you to all those involved in my nomination, from the nominators to the EUG nominations committee. I am very grateful for this honor, in particular to receive a medal named after Harold Urey, who did so much to invent the field of isotope geochemistry. It is truly a great honor. At the same time, I am also very humbled because I know so many of my colleagues deserve this as much if not more than I do. I would say, though, that I was never in science for medals or money, and I don’t think many of those in the audience are either. I’m in it because its fun and because I am intellectually challenged by it.

It was in the third grade when our teacher presented us with a picture of Saturn that I gave up on my childhood dreams of becoming a fireman or farmer and decided I wanted to become a scientist. Later, I was fortunate to have good high school teachers who taught exciting science and further stimulated me. I was also fortunate to go to UC Berkeley at a very exciting time when plate tectonics was breaking like a tidal wave over the earth sciences and where I had inspiring professors like Garnis Curtis, Ian Carmichael, and John Verhoogen. It was in John Verhoogen’s class when I was assigned to read a paper by Stan Hart out of a collection put together by John Bird who later became a good friend. What I took away from Stan’s paper was that you could use strontium isotopes to distinguish whether a magma came from the crust or the mantle. I thought that was cool and that is when I first became interested in isotope geochemistry.

I went on to the Graduate School of Oceanography at the University of Rhode Island where I studied under Jean-Guy Schilling. By chance, Jean-Guy offered me the opportunity to go to the Carnegie Institution of Washington and measure strontium isotopes on Mid-Atlantic Ridge Basalts with Stan Hart (Stan once hinted that this came about because Jean-Guy wanted more analyses than Stan wanted to do, so they decided to have a grad student do the work). I jumped at the chance. I’m grateful to both Jean-Guy and Stan for mentoring me. I later returned to Carnegie as a post-doctoral fellow working with Al Hofmann. When Al later left Carnegie to become Director of the new Geochemistry Division at the Max Planck Institut für Geochemistry in Mainz he offered me a staff position there. That turned out to be an amazing opportunity. Al assembled an incredible group of people there, many of whom have gone on to win honors themselves. I learned an enormous amount from my colleagues there. I have also learned much from the students and post-docs I have had at Cornell over the years. Again, I am deeply grateful to all of those who have mentored me and interacted with me over the years leading to this honor. 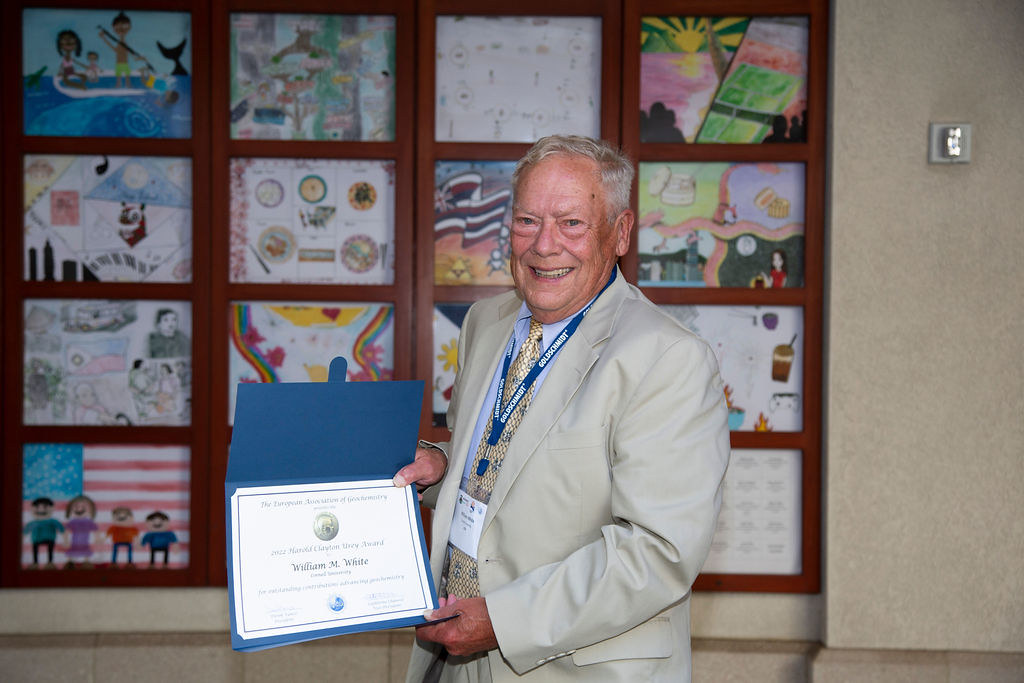